We weren’t exactly sure what Kia was up to when they set aside years of Optima momentum to rename their midsize sedan the K5. Well it turns out that Kia makes a pretty good family 4-door no matter what name is on it.  But, it is also just the start of unexpected things to come from Kia and the K5.

Once in a while carmakers do things not necessarily because it’s the smart thing to do, but because it’s the fun thing to do. And those are generally the cars that excite us enthusiasts the most. 2021 sees Kia go a little “Dodge” on their new midsize sedan by making it more powerful, and not just by a little bit.  It’s the Kia K5 GT. 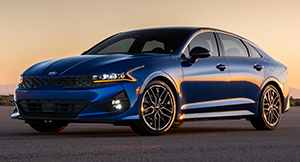 The K5 midsize sedan launched just a few months ago, replacing the Optima.  And along with the name change, came a longer, lower, and wider chassis; as well as optional all-wheel-drive.

That original Optima served Kia well for 20-years. Arriving for the 2001 model year, we declared that the good mechanicals and no nonsense design of this Accord and Camry fighter fully displayed the can-do spirit of its Korean creators, and could soon make Kia a 3-letter staple in suburban American garages.

That can-do spirit remains, and has channeled its energy towards creating Kia’s most powerful front-drive midsize sedan ever. And it feels like it; in a “this is way too much power for this car” sense.

It has no problem doing a burnout; and when its new Sport Plus mode is engaged, response is instant.  So, whether you’re sitting still or rolling along, punch it, and it takes off; or just spins the tires a whole lot, as there’s no all-wheel-drive here to provide any additional grip; stickier tires would help as well.

But Kia did provide a sweet 8-speed DCT transmission. It’s their own wet clutch design similar to a motorcycle or Volkswagen’s original DSG; bathing the clutch packs in oil to keep them cool and enable a more compact packaging. 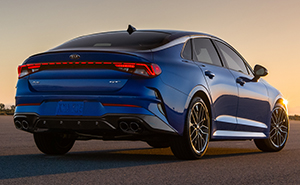 So, what’s causing all of this chaos in the first place? It’s a 2.5-liter turbo inline 4-cylinder engine cranking out 290-horsepower and 311 lb-ft. of torque. That’s 110 more horsepower than the standard K5.

In our original K5 test, we did long for a little more power, and Kia has certainly obliged. Too bad a snow-covered track kept us from seeing just how much faster it is. But, based on feel alone, we’d put 0-60 in the low 5-second range.

The K5 is of course mechanically similar to Hyundai’s Sonata, and this GT relating very closely to the Sonata N Line. According to Kia, the MacPherson strut front and multi-link rear suspension has been “sport-tuned”, but didn’t give a whole lot of details.

We will say the steering did feel a little quicker to respond, but ultimately it doesn’t feel as much like a sport sedan as it does a 90’s front-wheel-drive tuner car, with a cranked up turbo engine.

All of that aside, the cabin of the K5 really is a fabulous place to be; simple, flowing lines look Audi-esque in their execution. A panoramic moonroof is standard, the upgraded sport seats are more comfortable than sporty, and the flat-bottom GT steering wheel feels great in your hands.  There are plenty of GT logos scattered about, making sure all occupants are on the same page. 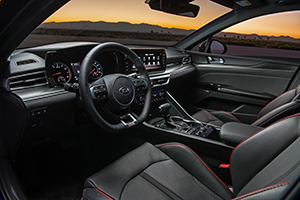 An 8.0-inch touchscreen for UVO infotainment is standard, with an option to upgrade to a 10-incher. Both are equally easy to operate.

Outside, Kia ups the aggression level with 19-inch machined finish alloy wheels; behind them, are bigger brakes with GT-labeled calipers. Black accents are liberally applied, even on the side mirrors and rear spoiler.  Finishing it off with quad exhaust tips, representing an outlet for each cylinder.

So, as impressive as the 2021 Kia K5 GT is, and that engine is the real deal, it feels like it needs more chassis tuning to go along with it. Now, some may call that a mistake, but the same exact formula was used for so many cars in the 1960s that we look back so fondly on now.  Muscle car family sedan...check. Indeed, it looks like Kia is continuing to check all of the boxes, even ones we hadn’t thought of.