The Los Angeles Auto Show is finally here, and with it comes some exciting new reveals, product demonstrations and more. We’re going to walk the show floor and give you the highlights, so come ride with us! 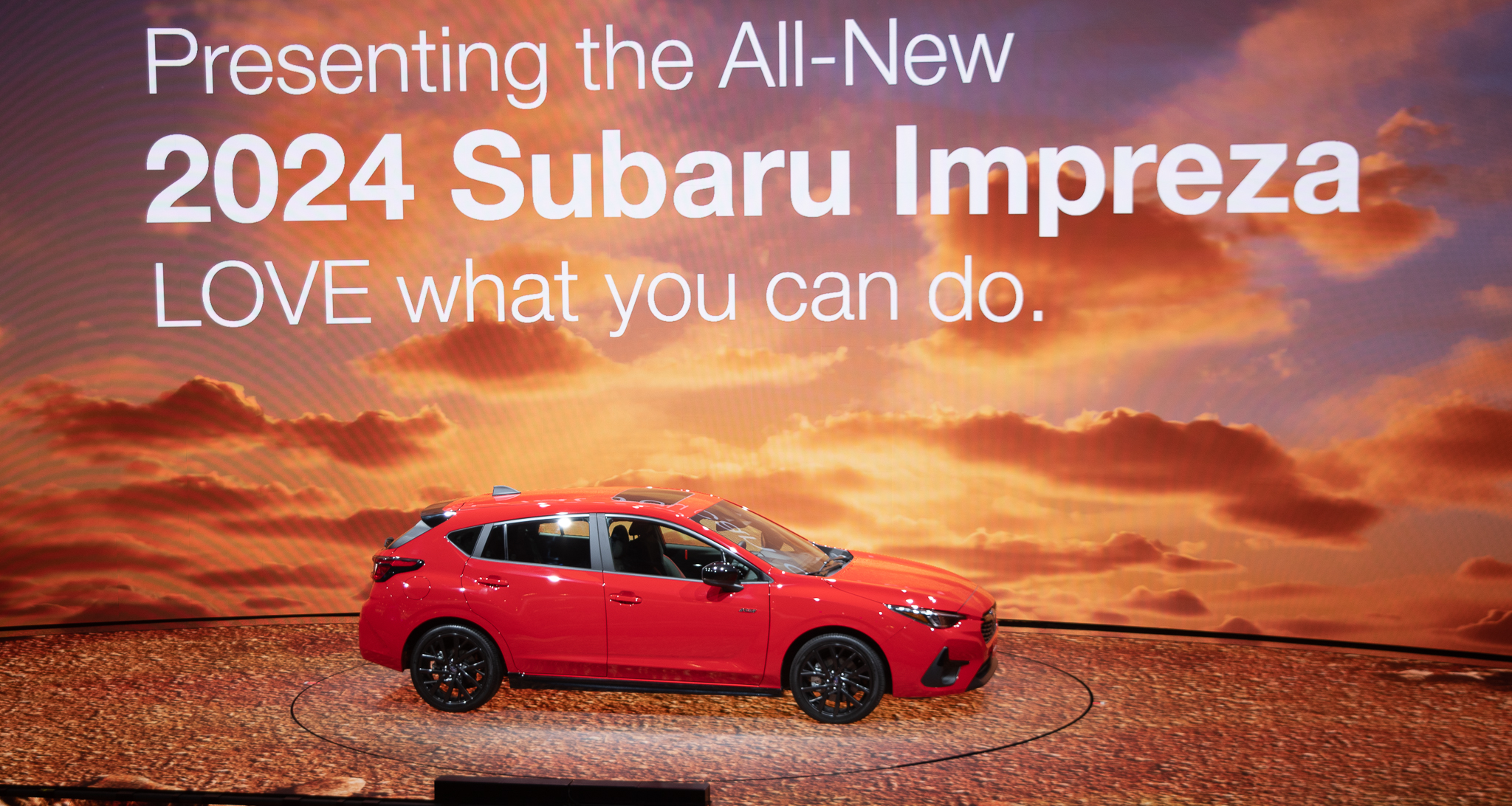 Our first reveal of the day came from Subaru. Behind the veil of a fake rainstorm (recycled water, mind you), the 2024 Impreza rolled onto the stage.

First things first, the sixth-gen model is offered exclusively as a five-door hatchback; the sedan is no more. The hatchback is stylish, 10-percent stiffer and offers up more performance. Three trims are up for grabs, ranging from the Base, Sport and RS. The first two come with a 2.0-liter BOXER engine, putting down 152 horsepower and 145 lb-ft of torque. Kicking things up a notch is the new RS trim, equipped with a 2.5-liter BOXER engine, dishing out 182 horsepower and 178 lb-ft of torque. All-wheel drive is standard, as is a Lineartronic CVT automatic. 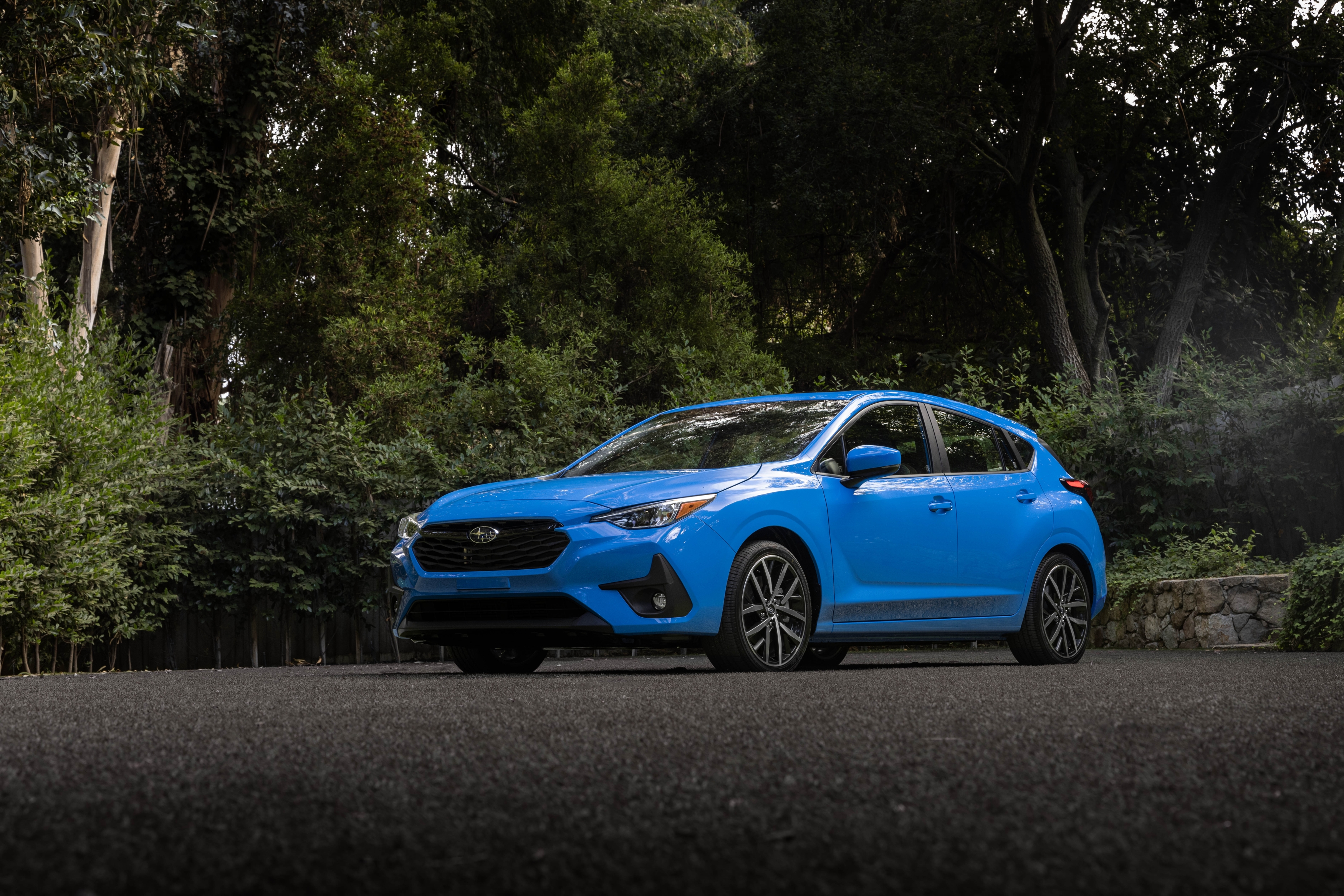 The RS also comes with unique trimmings: dark gray 18-inch wheels and black along the front grille, side spoilers, side mirrors and more. The LED headlights are upgraded, paired with LED fog lights.

All models are expected to launch this coming spring. These are just the highlights of the new Impreza; stay tuned for an indepth look coming soon! 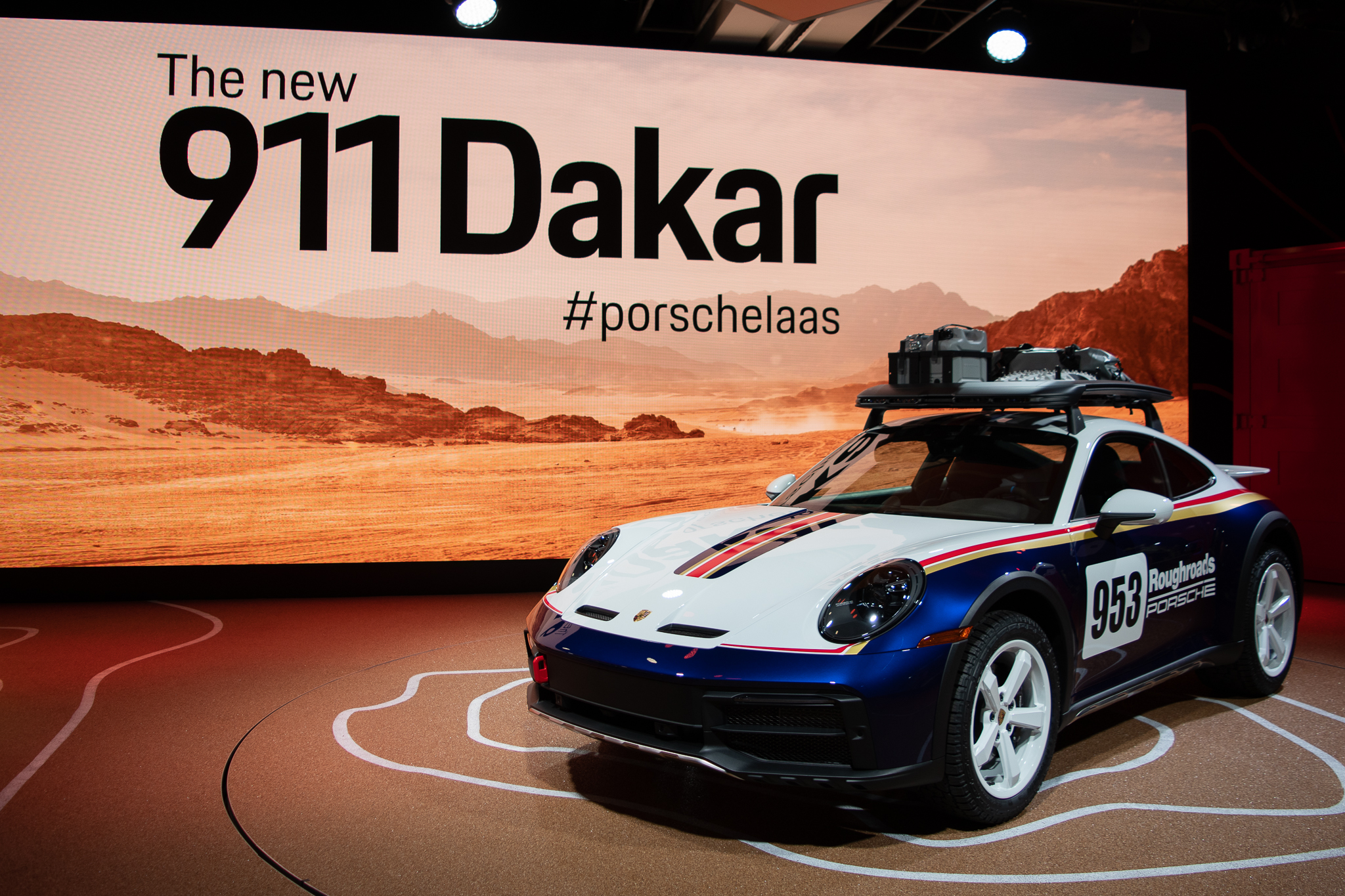 If you could, would you go back to the 80’s? Even just for a day? What if that day was to witness the first overall Porsche victory in the 1984 Paris-Dakar Rally?

Well, we had a chance to witness the next best thing: the all-new 2023 Porsche 911 Dakar. This off-road coupe, showcased in a standard theme and a heritage-inspired package, is powered by Porsche’s 3.0-liter twin-turbo Boxer engine, producing 473 horsepower and 420 lb-ft of torque. It’s channeled through an eight-speed PDK and, best of all, a standard all-wheel drive system.

We won’t spend too much time discussing it here, but you can check out our full coverage on the new Dakar right here!

Toyota Opens Up with Next-Gen Prius and More 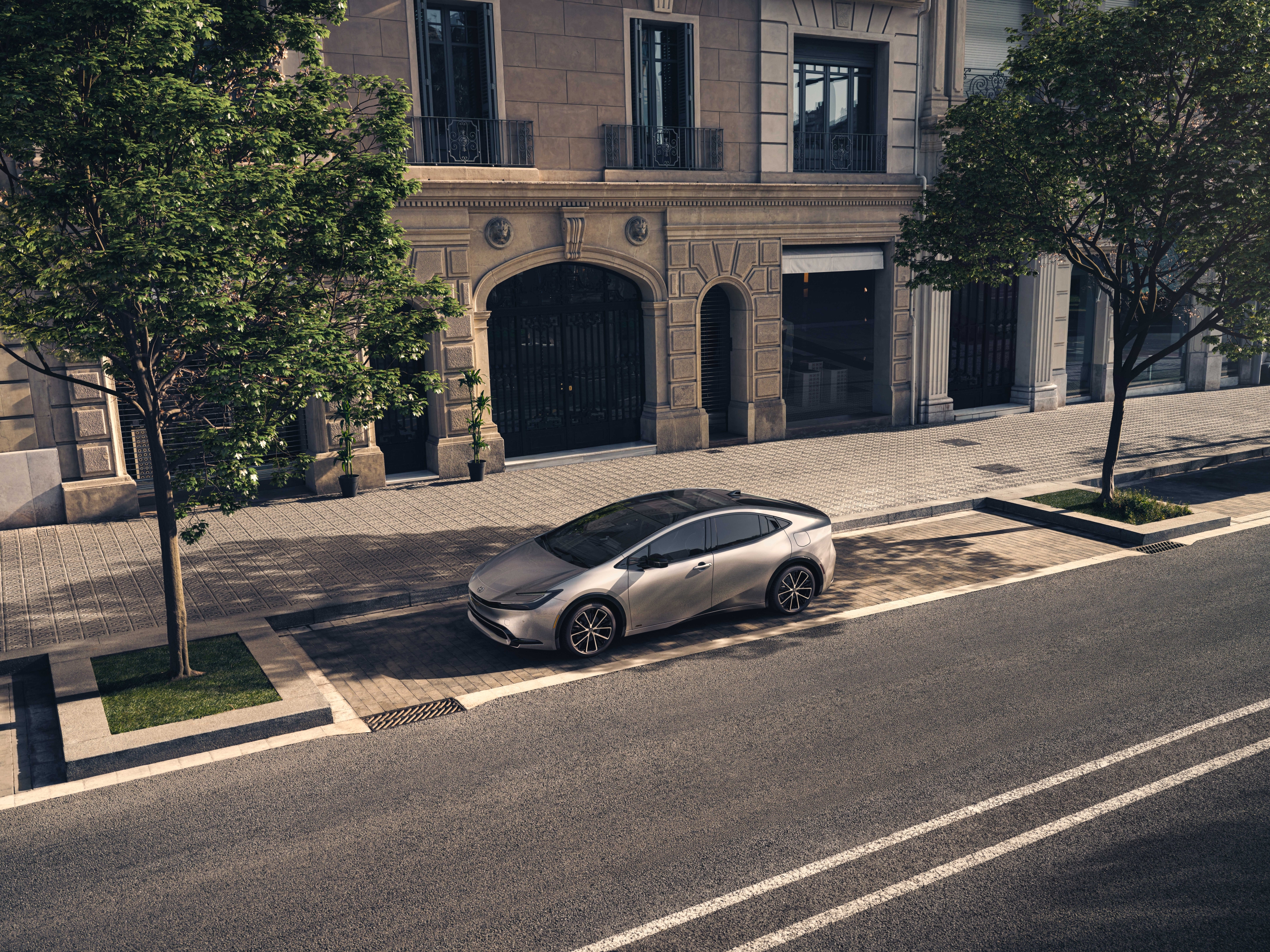 We already reported some on the 2023 Prius and Prius Prime, available for public viewing here in LA. The most standout change is, naturally, the sharper exterior design. This hybrid compact not only looks different, but is more eco-friendly, slated to be “the most fuel-efficient Prius ever” at a Toyota-estimated 57 mpg combined. Horsepower is also up to 196, generated by the brand’s fifth-gen hybrid system. That’s for the regular Prius; the plug-in Prius Prime will increase EV range “by over 50 percent” thanks in part to a larger battery. 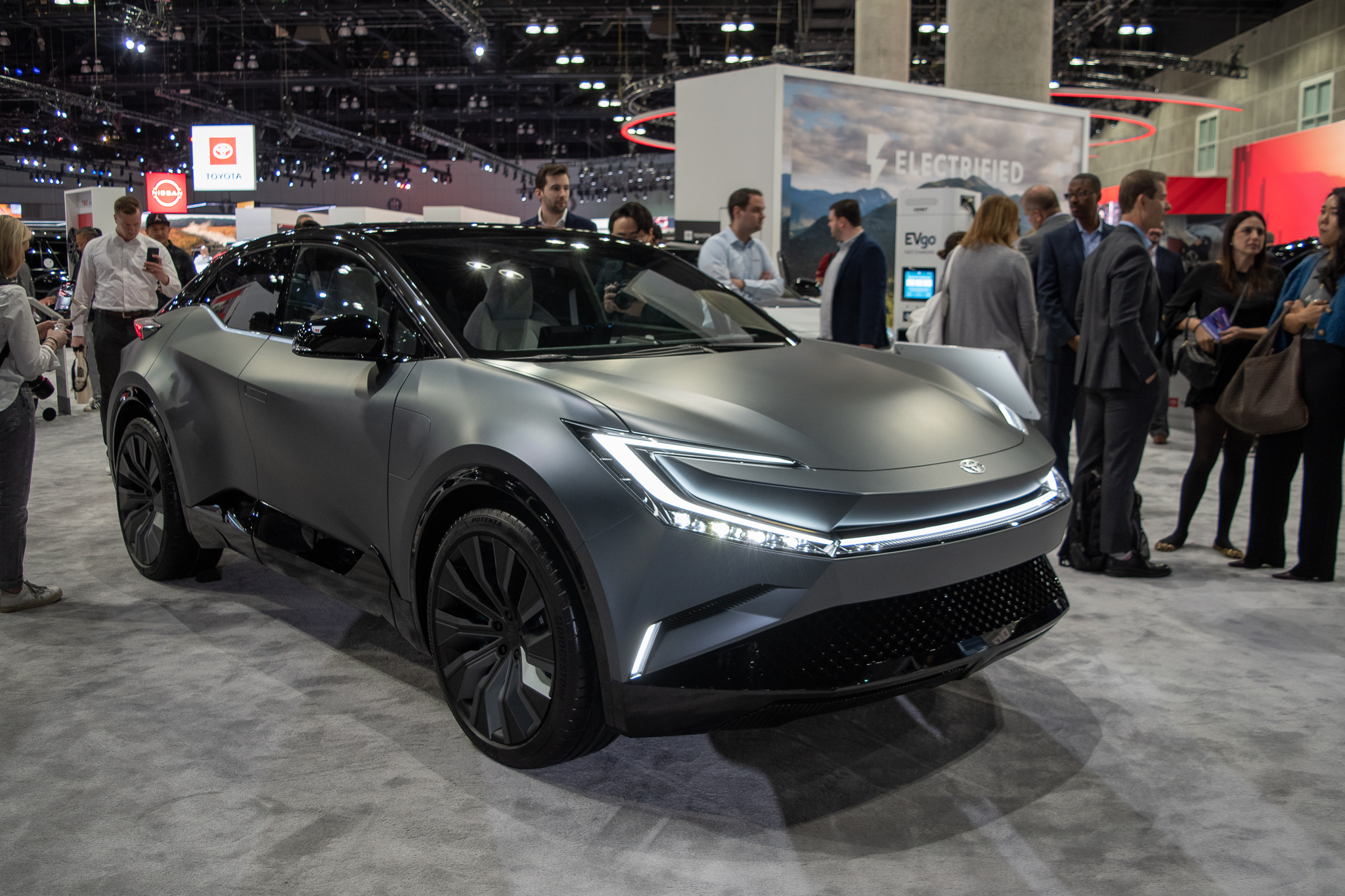 Also on the front of electrified mobility is Toyota’s bZ Compact SUV Concept. It’s a glimpse of where Toyota’s fully-electric “Beyond Zero” sub-brand could reasonably go. It’s aerodynamic in form with short overhang and sweptback angles, and the narrow cabin gives it a lower drag coefficient. 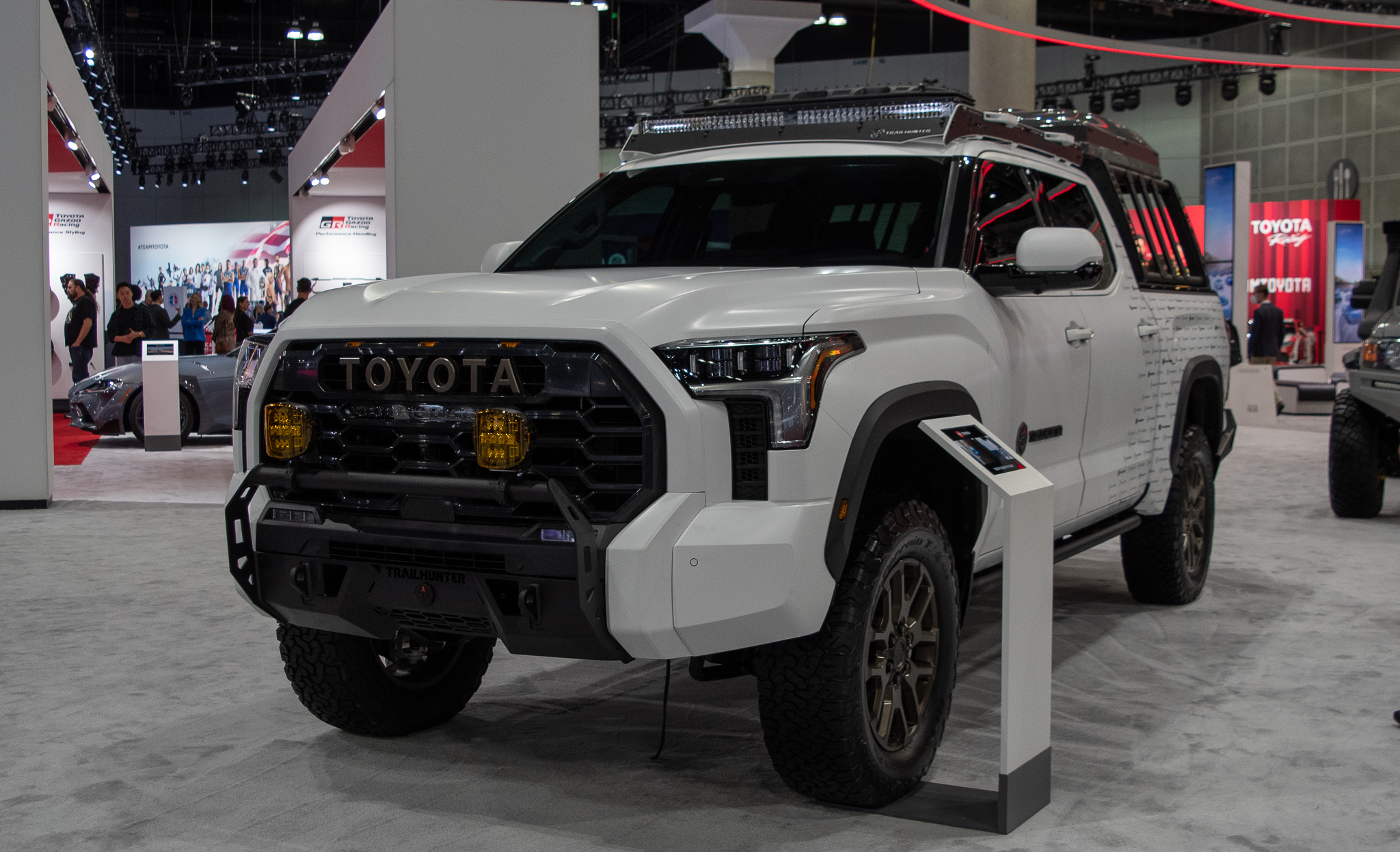 Toyota unveiled the new Trailhunter grade at this year’s Specialty Equipment Manufacturers Association (SEMA) show, now on display here in LA. The Tailhunter Concept was built to show how consumers will soon be able to equip their Toyota’s in order to better conquer the great outdoors. The idea is that a Toyota truck or SUV can be bought with all of these outdoorsy accessories, which can then be installed by the dealer before the car ever leaves their lot. It’s another take on the overlanding craze, and we’re excited to see how people opt their Trailhunters!

Toyota is also showcasing their GR Corolla Rally Concept and “10-Second Twins” Supras, among other models in their lineup. 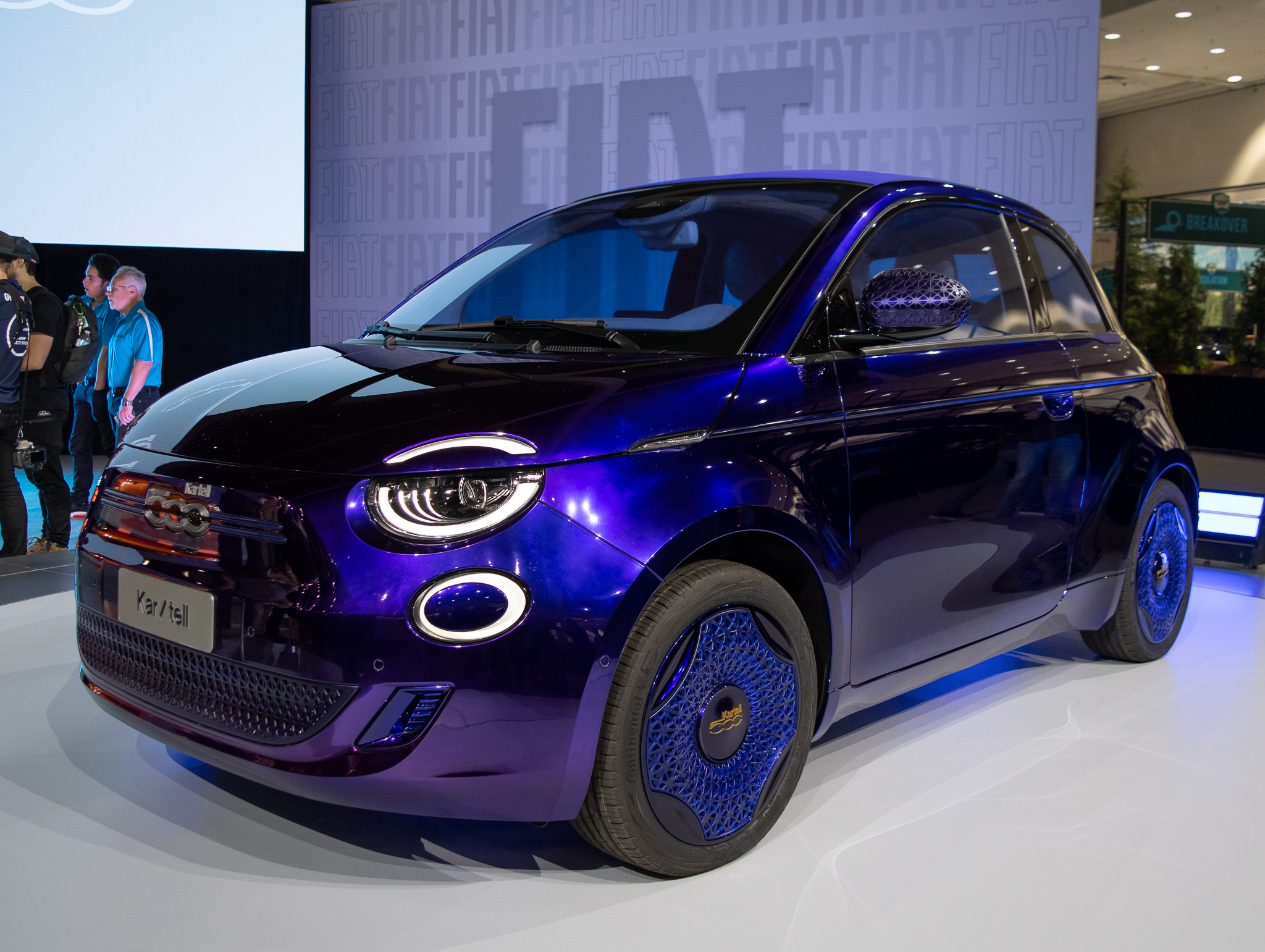 FIAT CEO and CMO global of Stellantis Oliver Francois revealed plans to offer the fully electric 500e compact in North America. Three special one-off concepts graced the stage, serving as harbingers for the 500e’s NA launch in Q1 of 2024. It was also stated that the 500 will only arrive in America as an electric model. 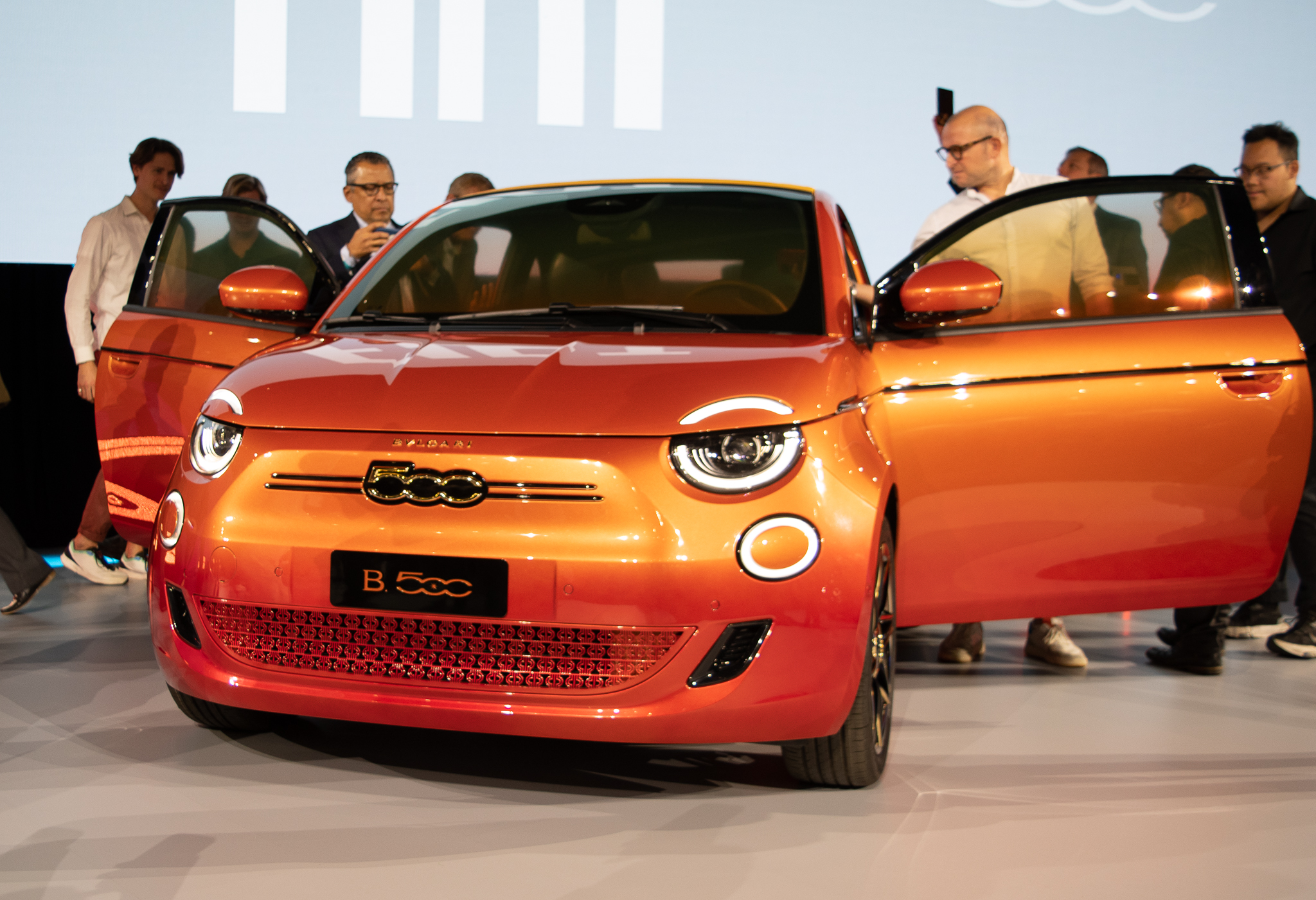 The three special models drew from FIAT’s Italian roots; one model from Giorgio Armani, another from Kartell and a final unit from MAI TROPPO. Each one pays homage to their shared culture, but in a distinct way. Though most importantly, they each play on FIAT’s pledge to sustainability, small mobility, and creating-- for some-- the ultimate fashion accessory.

All three models, however, were of European spec. The official NA model will be unveiled this time next year at the 2023 LA Auto Show. 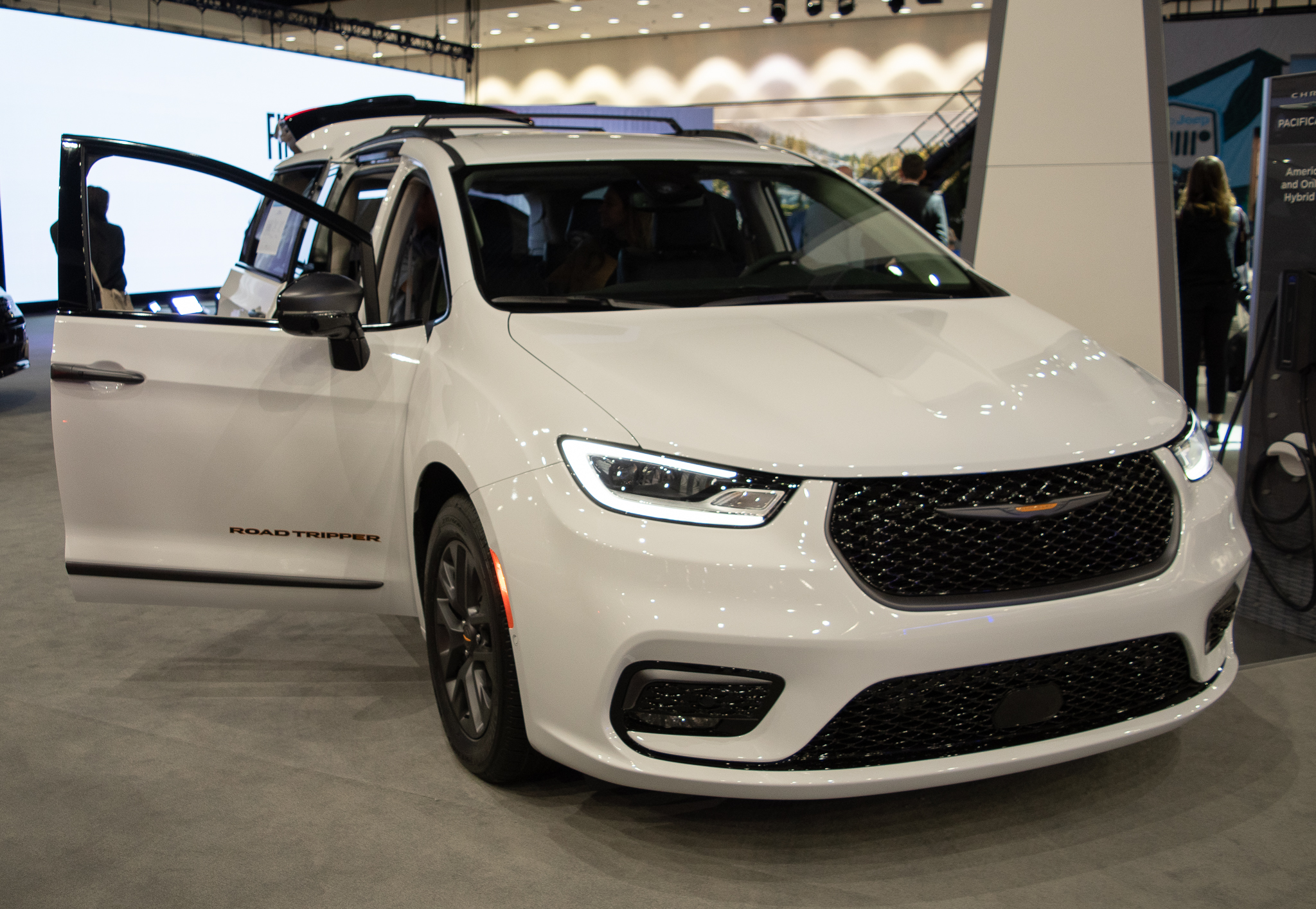 Other members of the Stellantis umbrella are using the show to highlight their latest reveals, though only one product reveal. Chrysler is showing off a new version of their Pacifica minivan and, you know what, it’s pretty rad. The 2023 Chrysler Pacifica Road Tripper was made to celebrate the family and friendly bonding we share on the road-- and specifically, the memories made over 40 years and 6 generations of Pacifica.

The exterior is signified by Brilliant Orange badging, bespoke wheel accents and other graphics. It comes standard with a roof rack, compatible with Mopar carriers. Inside are all the top amenities, like standard Uconnect 5 infotainment and Uconnect Theater, hosting Amazon FIre TV and more. The Road Tripper-- a name most voted on by social media polls-- is available on the Pacifica Touring L and Pacifica Touring L Hybrid, available in three exterior colors. 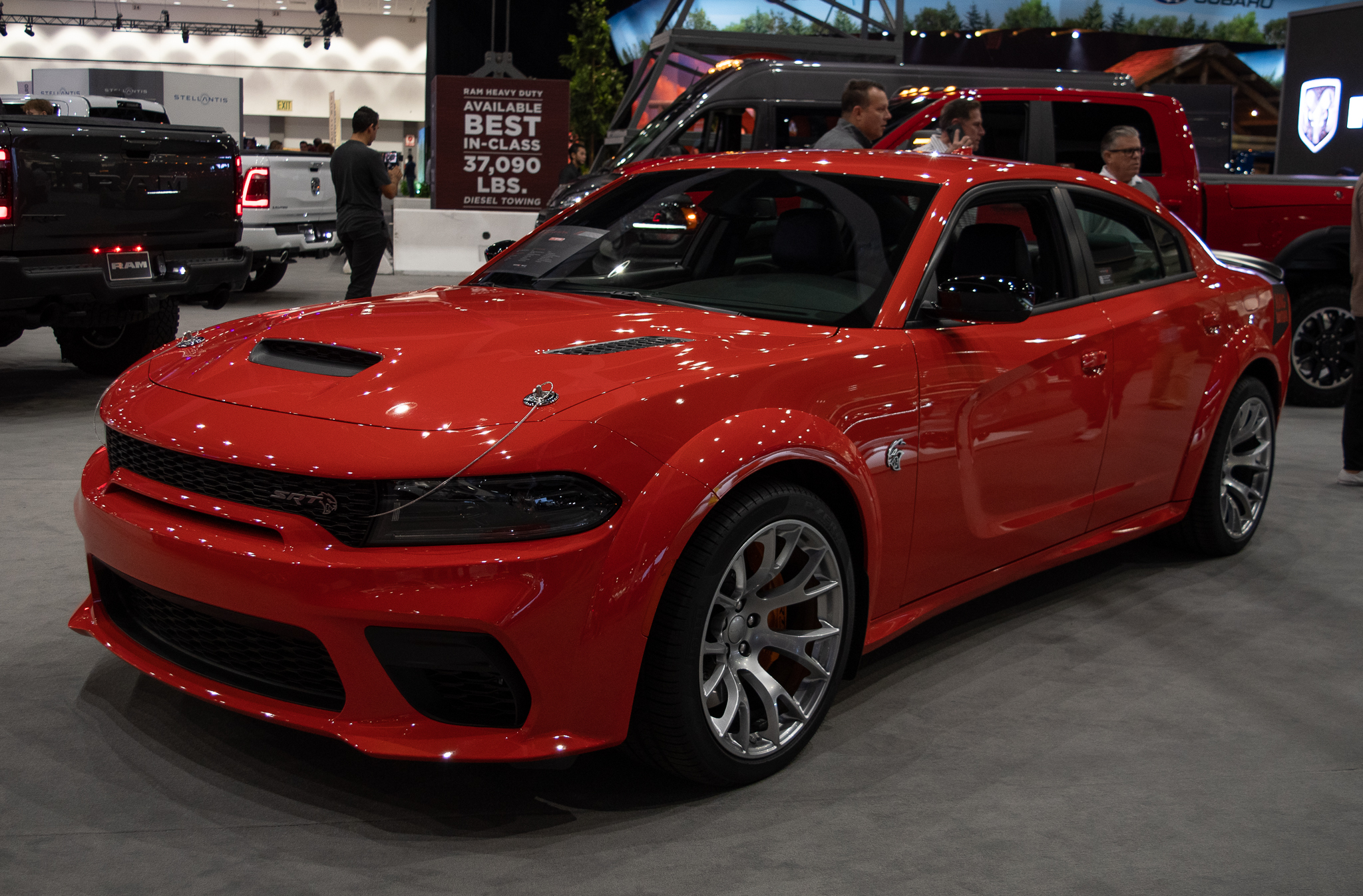 Dodge is also available with some of their most recently unveiled models, including the 2023 “Last Call” Charger King Daytona and 2023 Hornet SUV. The Daytona SRT Concept is also on display.

Jeep is ever present with some of their Detroit unveilings, such as the 30th Anniversary Grand Cherokee 4xe. The showcase of electrified models further cements Jeep’s decision to offer an electrified variant of all their models by 2025. 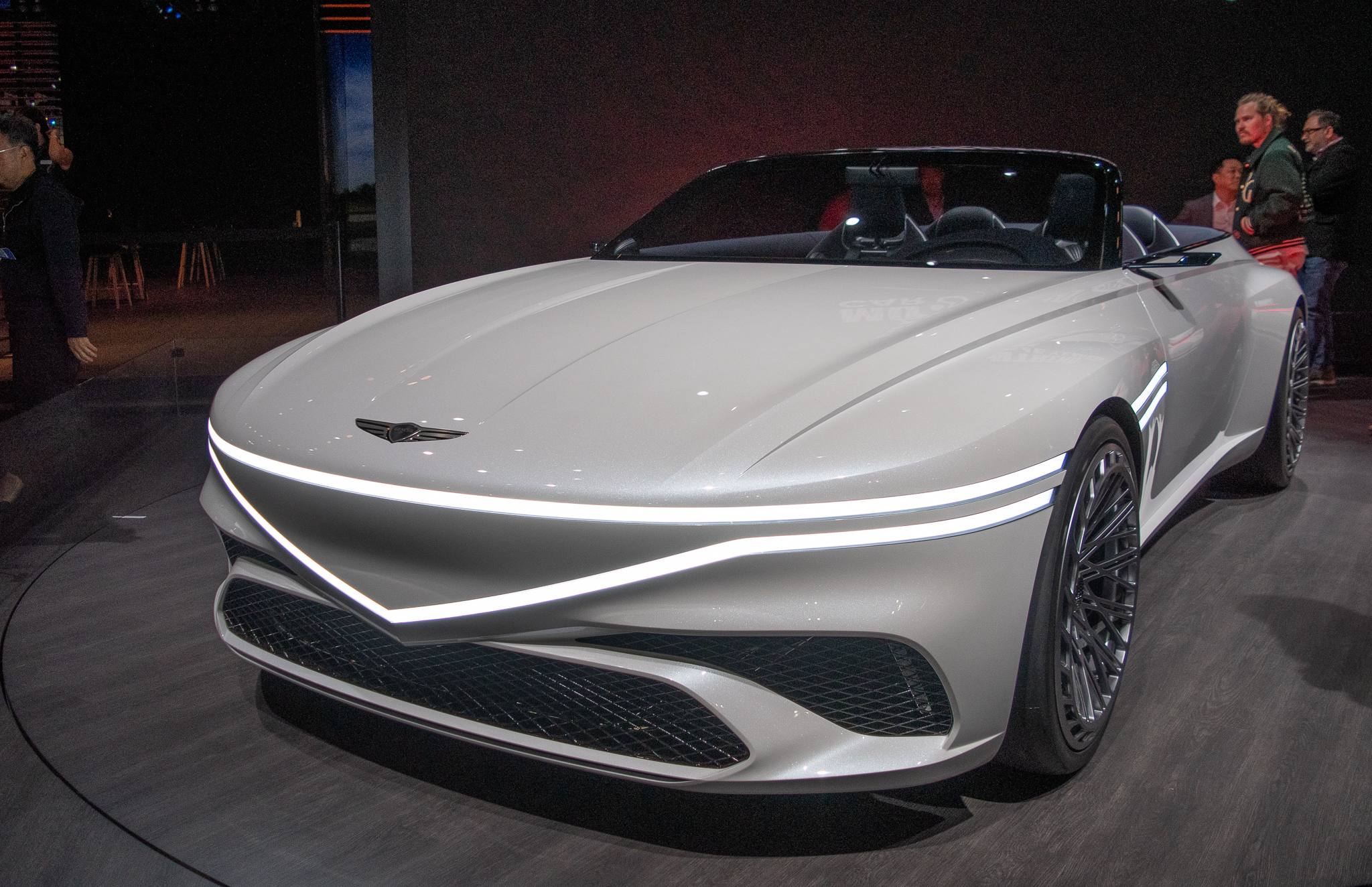 Genesis rounded out the morning with a showing of their X Convertible concept, a four-passenger drop top sharing its electric powertrain with the X Concept.

The X Convertible's lineage can be traced back to the two-door grand tourer X Concept, followed up by the X Speedium Coupe concept.  The Convertible completes the concept trifecta.

It features a long hood, long wheelbase and minimal overhangs in the front. The leading edge of the car is defined by Genesis quad lights, stretching across the bumper and going beyond the front fenders. At the bottom of the bumper are lower openings for battery cooling. 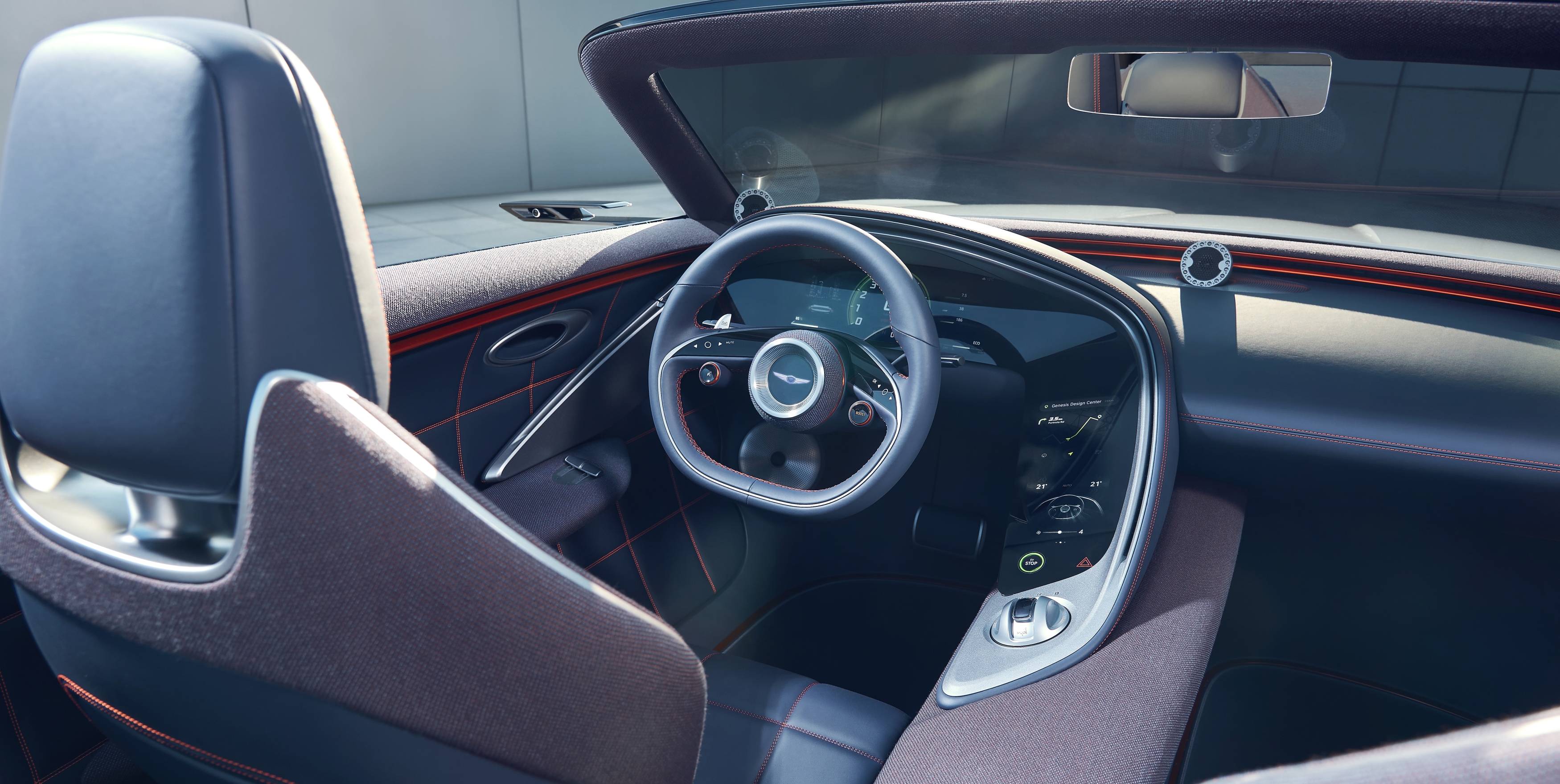 The cockpit is driver-centric, featuring a wraparound dash that cocoons the drver. The primary color, Giwa Navy, is named after the roof tiles found on Korean houses. The accenting Dancheong Orange is named after the color of traditional Korean wooden buildings. 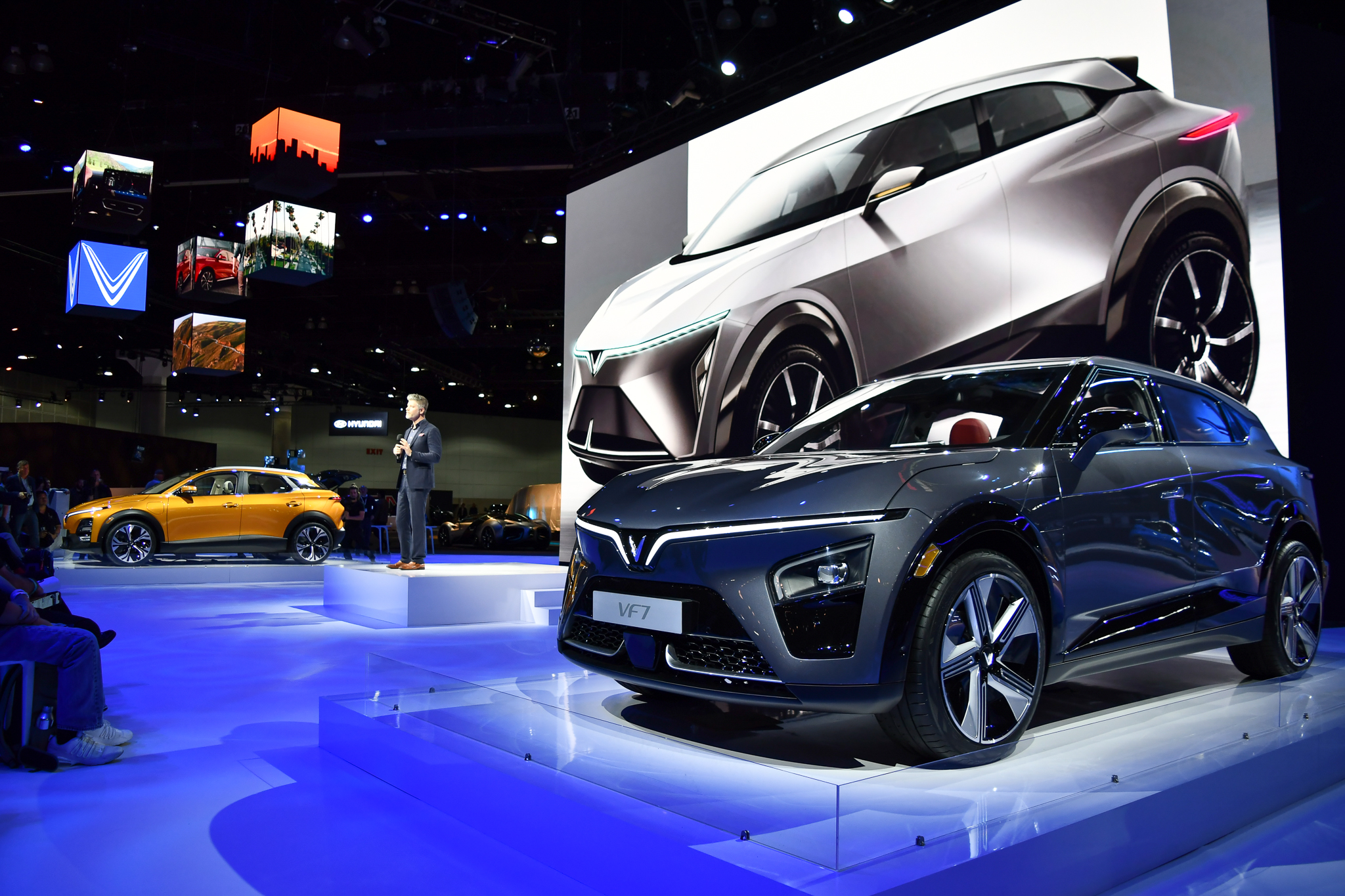 Both models were designed jointly by VinFast and Torino Design, flexing the same styling cues we’ve seen in their previously announced models. Their driver-centric interiors are met by a full suite of active and passive safety features, along with other advanced features derived from tech developed by other groups in the “Vin” family tree.

Preliminary specs put the VF7 at 178.9-inches long, with the VF6 coming in slightly under at 166.9-inches. Each one is available in either an “Eco” or “Plus” trim, the former generating less power than the latter. As of now, the VF6 Eco is looking to produce 174 horsepower and 184 lb-ft of torque, up to 201 horses and 228 lb-ft in the Plus model. The VF7 Eco actually starts where the VF6 Plus leaves off, receiving more power in its own Plus trim, up to 349 horsepower and 368 lb-ft of torque.

These are, again, all preliminary specs. We’ll have the full details when VinFast models make it to US streets.